Debating as a judge

After a debate the judges take some time to talk about the debate and ultimately decide on the ranking. 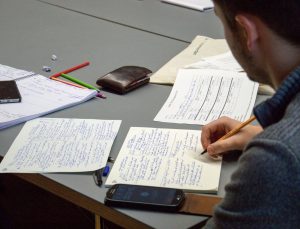 The BPS-format focusses on logical analysis first and foremost. Arguments are judged on the soundness of their logic and their relevance in the debate. The core questions of the debate should be addressed and the teams’ arguments should be logically consistent. Self-contradictions should be avoided. Refutation (Rebuttal) of the opposing teams’ arguments, good responses to POIs (questions/points the opposing teams may raise), as well as good fulfillment of one’s role (e.g. the final speakers on either side making their partners cases relevant and strong without raising new arguments) are also vital elements of a good speech.

In judging the debate, it is central to critically examine the logical steps of the arguments presented and whether the arguments are relevant. Therefore, as a judge, the two questions one should ask oneself most while evaluating the debate are: “Is that true/Does that follow?” and “Does it matter?”. Personal views should obviously be set aside as far as humanly possible to allow for a fair assessment.

Ultimately one of the judges announces the call/ranking and explains why it was decided on and what teams have done well and could have done better. The teams and individual speakers may afterwards approach one of the judges for more detailed feedback and constructive advice.